In Right Place, Right Time to Save a Little Girl's Life

My fiancé Scott (hey now as I update this, he's my husband!) saved a little girl from drowning today. It's the second time in a year since I've met him that he's done that. A year ago he was lounging beside a condo pool, and looking down, saw a baby on the bottom of the deep end. The mothers and kids were all talking and not paying attention, and she had fallen in unnoticed. He jumped in, revived the baby, and didn't make any big deal about it. He disappeared.

It happened again today. This time as he was napping on the sand he heard people screaming right in front of him. Looking out over the ocean he saw a little girl's legs sticking up, bobbing upside down lifelessly like a cork, about 50 feet away.

No one was going after her because that beach is known for deadly undertow due to the steep drop off right at the water's edge. Swimming isn't recommended there and there are no lifeguards. They all stood paralyzed.

Without hesitation Scott sprinted toward the water, throwing off his cell phone, keys, money, and credit cards as he went. He reached her, she wasn't breathing, and while swimming shoreward with one arm he used the other arm to squeeze her over and over to get the water out.

But each time he got near the shore, the powerful undertow dragged them both under, tumbling them like a washing machine and dragging him back out gasping for breath. He tried going sideways, but the undertow was all along the beach.

If it had been just him he could have swam laterally until he finally found a spot without undertow, but she didn't have unlimited time, and holding her above the water was tiring him out as he was pulled under with every crashing, rolling wave. Even when he fought hard enough that he could touch the steep bottom with his knees, the undertow dragged them back out. Three different times he thought, "This is it, I'm going to drown." Still he didn't let go of her.

As they came within yards of the shore, the eighty-ish grandfather went calf deep into the water but backed up to safety when he felt the steep dropoff and the undertow pulling him out. The others were afraid to try. Finally, exhausted to the limit, but clawing with one arm and both legs, Scott was able to scramble up the bank. By then the four year old girl was crying--a good sign--she was breathing again. As her teenage sister tried to take her, she clung desperately to Scott's neck and wouldn't let go. 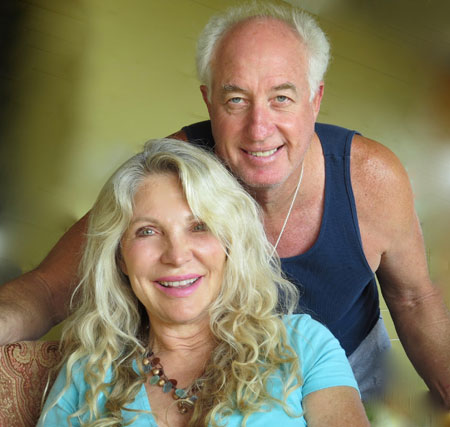 Now that it's over, we're marveling at the complicated GPS-like routing and timing that had him in that very spot at that very time.

We had gone to Malibu to see a client of Scott's, ate seafood at the famous, funky Neptune's Net on Highway 1, then drove through the parking lots of four gorgeous beaches in Malibu before deciding they were way too crowded.

I said, "Oxnard, un-glamorous as it is, has some long, almost deserted beaches--there's one at the harbor." Scott decided on the 5th Street beach in Oxnard instead, and soon we were barefooting it across deep, soft white sand under an eerily brilliant blue-gray, thickly overcast sky. There were few people around.

He didn't like the dune I chose at first, but he conceded, and we lay down for a nap. The sound of crashing waves lulled us into delicious, blissful meditation and napping. We opened our eyes about the same time as usual, and I said, "I want to walk/jog down the beach."

He always wants to do everything with me and is healthy as a horse, so I was a bit concerned when he said, "I can't go. I feel like I can't get a full breath. But I'm good. You go on."

My jaunt down the sparsely populated beach lasted about thirty minutes, and as I jogged back toward him I could barely see him in the distance through the thick, misty air, but it looked like there was a crowd around him. Odd...

I thought, "I hope he's okay! He wasn't feeling well."

By the time I got to him they were gone and he was sitting there alone, stunned, sandy, and soaking wet.

I wondered why his keys, some soggy money, credit cards, and phone were lying on the sand.

"Are you okay???" was my first question.

As he told me what had just happened I realized it wasn't him the crowd was concerned about. He said, "I wish you'd been here .... but no, I'm glad you weren't. You would have been terrified, and you might have tried to help." He knows I'm not a good swimmer, and many people have died in riptides trying to help someone. 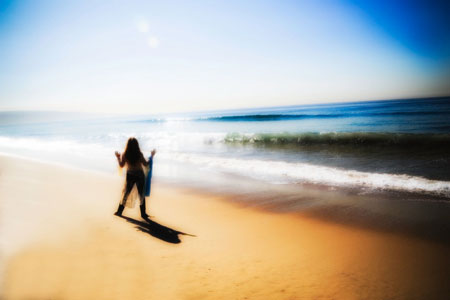 It suddenly occurred to me, "I'm getting that when you couldn't get your breath, you were tuning into what was about to happen to her. She couldn't get her breath. If you'd felt fine and gone jogging with me you wouldn't have been here, and she would have drowned."

He added, "There was no doubt she would have drowned. No one was doing anything."

"And if we'd been at any of the other five beaches we thought about....

And if I hadn't picked this sand dune--precisely in front of where she went in, even though you didn't like it at first...

The girl's family had been worried Scott was going to have a heart attack after it was all over, he was so shaken, gasping, and exhausted to his limits. But he feels good now. The out of breath feeling was gone after that! It was foreshadowing the girl not being able to breathe underwater.

You know me. I don't believe in death--it's just a transition to more life--but it wasn't this little girl's time to transition.

It's something to marvel at, this mystery of life.

And something to rave about.

PS - What if You Could Change a Life by Just Sharing?

Visualizing isn't to tell your Large Self what you want--it already knows, and has created it. Visualizing is to keep YOU focused on what you want, so you don't cancel it before it pops into the physical.
Lola Jones