Life brings the best surprises. Lola never expected her book, Things Are Going Great In My Absence, to be translated to German. She was delighted that it was finding its way to English speakers all over the world, and wasn't chasing fame (or anything) but just enjoying living and working. The work is its own reward.

Then amazing Gabriele Kingwill came to the 5 Day Retreat a couple of years ago when Lola lived at City View Ranch in Austin, Texas. Soon after that Gaby was guided to translate the book, Lola gave permission, and then Gaby got on her bicycle and took it around to some metaphysical bookstores in her town of Rosenheim, wondering with each turn of the pedals if they would turn her away. 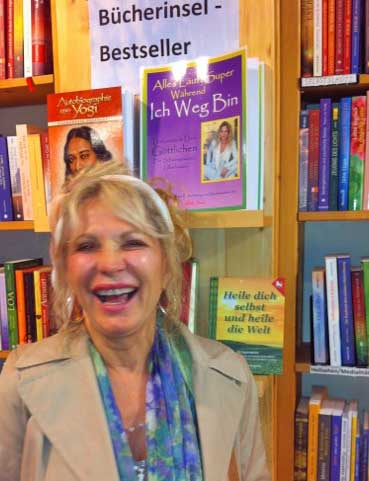 Not only were they receptive--one bookstore owner, Priyanka Thiede at Die Bucherinsel in Rosenheim, read it and loved the book so much she told everyone who entered the store, "You must get this book! This is it!"

Priyanka attended the next 5 Day Silent Retreat in Germany as Lola's guest.

Germany is home to the world's most enthusiastic and fastest growing Divine Openings community, thanks to Gabriele Kingwill. Who could have guessed?

Here's Lola at Die Bucherinsel, in front of the bestseller display, with Things Are Going Great In My Absence beside another best seller, the 50th Anniversary Edition of Yogananda's Autobiography of a Yogi.

Nice company to be found in.

170 people showed up to hear Lola speak about spiritual enlightenment at their bookstore for two evening talks she gave while there for the first Germany 5 Day Silent Retreat (the largest and most blissful retreat ever) in October 2012. In August 2013, it was 225 people. Things Are Going Great was still the store's best selling book. 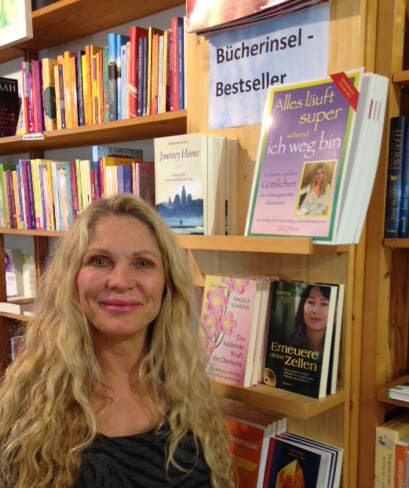 Videos of the bookstore talks and other talks about spiritual bliss and practical life results from the retreat are in the Level 1 Online Retreat Course.

Level 1 and 2 online are available in German now!

People comment that pure light emanates from the videos at times. See them if you're a member!

If you're not yet a member, check it out. You have some fun ahead of you.

Eventually, talking to God will feel like talking to yourself, albeit your expanded Self. It's a tricky point in your evolution--don't begin seeking again, looking for something 'other'--you are what you were seeking.
Lola Jones