Free Will vs Destiny.Which Is It?

Is a certain matter ours to do or decide using our Free Will, or is that one best left to The Presence? Free Will or Destiny?
by Lola Jones

First of all, destiny doesn't mean God assigned it to you or stuck you with it. YOU planned those elements of destiny when you were still in the Non-Physical.

Whether you want to call some things preordained or destiny, it's still your Large Self who planned it from that broader perspective. I believe we leave most of it up to Free Will, and make most of our decisions in the moment or even on the fly, but that some things are so important for us to do or experience, we line it up as inevitable, and the world will tilt on its axis to make it happen if it's supposed to. There are some events and people we are destined to encounter.

There were a number of events in my life that verified without any doubt that there were things I planned to do before I came to this life, certain turning points and directions that I laid out, then forgot as I incarnated, only to live into them and "surprise myself" later.

I do love surprises, and would never give that up. It's part of the fun of coming here. Even The Presence loves to be surprised by you doing something fabulous and unexpected.

In 1985, when I was thirty one and desperately seeking, I was given a two hour "whole life reading" by a very gifted psychic. He told me some wonderful things I found hard to believe at the time (that I'd be a "Louise Hay-like teacher"--check) and others I was not happy about at all (that my work wouldn't fully flower till I was in my fifties--check, and that I'd "save the best for last.") You can imagine how funky those last two felt at the time!

Those two hours worth of "destiny" predictions have all happened except the "best for last" part, which is yet to come. My inner knowing is that this applies to romantic relationship in particular. Hoo boy, as healthy as I am, "last" could mean I'll be eighty. (Grinning here. I don't think it will be that long, and it's all been good.)

Free Will is the main reason psychic predictions are so difficult to make accurately. Each time we change our vibration, or take even one new fork in the road, our entire trajectory changes.

Way back when I got readings, my favorite psychic remarked that I was her only client who would deliberately change my trajectory if I didn't like her predicted outcome. She said few people do that. Most take the reading as fact and don't bother to change it.

Destiny seems to play a larger role when a person plans a big mission for themselves rather than a quieter life. (I want to be clear, a big mission is not superior to a quiet life.) A magical sequence of events practically herded me toward creating Divine Openings against my very strong Free Will "opinions." I was single, this nice man kept calling me, asking me out, and I kept turning him down--I wasn't interested! Then I ran into him three days in a row, in three different, quite unlikely places, in a city of a million people: a street fair, a thrift shop, and finally at an art opening. I walked up to him and said, grinning, "I guess you and I are going to get to know each other after all." We began to do fun things together, and talk on the phone. 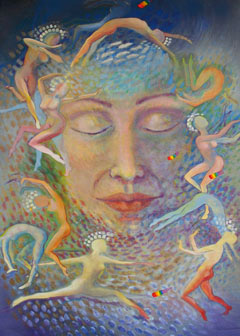 One day he called me up and said, "What are you doing?" I replied, "Today I got this amazing new CD of these new artists I'd never heard of. They just glowed on the CD cover, and I've been listening to one song over and over all day, while painting a huge picture, with inexplicable tears just gushing."

He said, "Wow, I'm sitting on the floor listening to one song on repeat, gushing tears, because I was just given a million dollars in stock, pre-inheritance. I'll bet it's the same song... don't tell me... the song is Deva Premal and Miten's Om Namo Bhagavate." (It means God is Within.)

That was the song.

We became fast friends, but I was clear it was to be platonic, not romantic, despite his romantic fervor, so it took that crazy sequence to get me to be with him. We lived and traveled together as friends for a year and a half, had a fabulous time. He introduced me to an experience that would seed Divine Openings, and knowing I had little money at the time, he offered to pay for my $8000 tuition and travel to the twenty one days of silence, which gave me that golden opportunity to go within in silence and let go of everything else. It changed the trajectory of my life (and possibly yours!)

When I got to the compound in India (I'd never desired to go to India OR an ashram before) they showed us some videos of past participants, and there was Deva Premal. Her music had been calling to me from the future and inspiring my painting for a year and a half before I went there. And her music had inspired the energy that went into that painting. I didn't know at the time that the painting would go into my book--the book and Divine Openings weren't manifested yet--I thought I was failing as an artist because my paintings weren't selling. Now I wouldn't sell those paintings for any amount of money.

The rest is history.

The man was reluctant to let go of our life together, even after I pointed out his girl at a party I gave. He wasn't interested in her, he said. A year later, he told me she was "the ONE," (not even remembering that I had told him so, and I didn't say I told you so) and he married her.

Time is a mysterious, wonderful thing that magically folds in on itself. I don't try to figure it out, but do try to tap in and use it. I recommend the three films: Interstellar, About Time, and The Kid, because they deal with our future selves helping our present and past selves.

In Portal 4 Online, Jumping the Matrix, we play with time a lot.

There are many historical accounts of prophecies and other events that illustrate Destiny vs. Free Will, although I of course tend to go by my own experiences and inner knowing. I wish I could remember where I read the story about an older man who bowed down to a seemingly ordinary young man as they passed walking along a road in Italy. The man called the boy "Your Excellency," much to the young man's surprise. The young man later became a Pope.

My own experiences and others I hear or read about verify my inner knowing that there are some things we "planned" for this life, such as bearing a certain child, or birthing an important idea. Our Large Self lines it up, often in spite of our kicking and screaming and trying to go the other way--while other things we leave to Free Will and in-the-moment choices at every fork in the road.

My direct knowing of it is that there are some momentous life events we pre-plan, but most we leave open. From Large Self perspective that sees the value in all experience, we even gladly plan things our human selves would not think were great, such as handicaps, mundane lives, or early deaths.

I hope this stimulates and reawakens your own inner knowing of the perfection of your life's journey.

Much Love and Grace,
Lola

PS - I'm laughing with a friend now, and she's saying, "I'm winging it ALL!" She feels she left hers open-ended all around! Different strokes for different folks. She certainly does create fun things, and she's so relaitvely resistance free, she can turn on a dime and succeed in a new direction just like that!

The only real security is knowing who you are and how amazingly potent your power is.
Lola Jones