An Eternity's Worth Of Expansion Awaits

Well, it's a good thing we take our progress with us when we go on to the big playground in the sky, because I have a To Do list longer than Snoop Dog's rap sheet. Karma says you take your failings and debts with you when you go, too, but I don't feel that (and I'm sure some people are mighty glad.) It does give me comfort that if I don't get around to all of these creative endeavors in this lifetime, I'll be even better at it next time around.

In progress are three more books, new audios, an art book, a painting commission, many other projects, and when it's time, a film about Divine Openings, with Russell's help. My fabulous assistant and I usually pow-wow first thing every Monday morning, and last night she dreamed she had a paper to write and was late. We laughed. I keep her To Do list filled too, and we talked about how to stay in balance and be glad we have fabulous things to do.

Then of course there's playing in this new California playground I live in part time now, trying new restaurants, walking the beaches, and horseback riding in this most beautiful country. Rivers and mountains, vistas and grasslands. I set the intention to have riding friends here, and have two already! 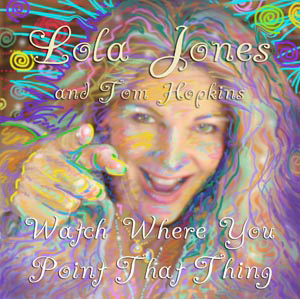 The <ahref="all-lola-jones-music" target="_blank" rel="noopener">Watch Where You Point That Thing CD now has the instrumental versions of all the songs on it as a bonus, too.

Plus it has the new song Beautiful Faces on it that I wrote and recorded for Russell's film of the same name. It's a touching story about an extraordinary public hospital in Mexico City that rebuilds the heads and faces of profoundy deformed children, the kids, parents, and the doctors who work there.

The CD needed a more eye-catching new cover before it goes to some stores, and this one will reach out and grab people from across the store. No one ever said I was shy.

You can get the song as a single too. 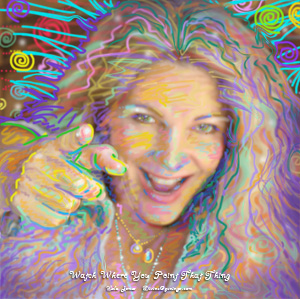 When your heart desired it, your Large Self got on the wave and started surfing it immediately. Your job is to get on that wave too.
Lola Jones