We knew we were changing lives all over the world but we didn't realize how widespread it was.... We knew that men and women everywhere were letting in this Grace and letting go of stress, suffering, struggle, and heaviness.

Then we discovered a map that shows us how many countries have visited our beloved www.DivineOpenings.com website. It was pretty astounding to find that MOST of the world has been here. It's such a small world, thanks to the Internet.

From political and social change to the spread of breakthrough ideas, we so appreciate the miraculous Internet. It gets harder and harder for dark, hidden corners to exist now that information flows so freely--the challenge now is sorting through all that info! Fortunately we are guided.

On the map, of course the U.S. is the darkest blue, indicating the most visitors to the site by far (Alaska is just coded with the rest of the U.S.)

Canada, UK, and Australia were not surprising to us since they speak English and search the Internet in English.
What surprised us was South America, Africa, China, India, Russia, the middle east, and the east. We have students in INDIA!

Germany is actually the second most active country in Divine Openings, due to Penguin Publishers publishing Things Are Going Great In My Absence  and Living Large in German, and the German people embracing Divine Openings so lovingly.

Things ARE going great in my absence! 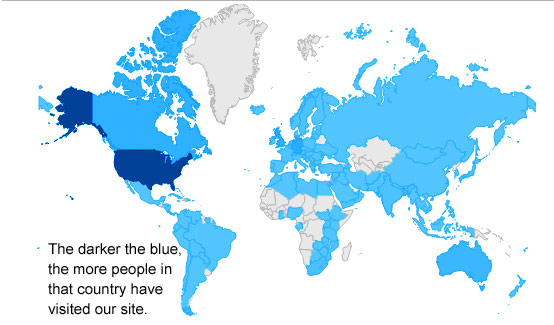 The only countries where no one has visited our site are gray.

Once you have it all, the ultimate fulfillment is sharing it with others, and showing them how you got there, if they are ready to let it in. Everyone wants to make a difference in this world.
Lola Jones