Animals as Spirit Family - Goodbye to Me in a Dog's Body

Honey was me in a dog's body.

We are both part of the same lifestream, just expressed two different ways in this time and space. She went everywhere with me until a few years ago, even following along on three-hour horseback rides through the rugged, mountainous wilderness of Ojai until the ripe age of sixteen.

Many of you who came to retreats back when I held them at my ranch in Texas or my home retreat center in Ojai remember Honey as my co-facilitator, always at my feet, presiding with her signature proprietary dignity. Last year, although darn it they don't allow co-facilitator dogs at the Santa Barbara retreat center, Camille, a five time participant of the retreats, "saw Honey" walking beside me.

It didn't surprise me--of course her non-physical aspect would be there.

Everyone loved Honey, even people who didn't like dogs. She was the perfect dog even when very young, very conscious, learning tricks with little effort--she understood what I was saying.

Honey had her own sofa or bed in every room of the house.

When she was eight a vet said her severe heart murmur would doubtlessly end her life early. Not only did that not happen, but the most recent vet said he could not believe she had lived for nineteen years with that heart condition.

She just refused to believe it, and she certainly was not going to leave me before she had to!

Where before Honey would sneak into the car to avoid letting me go anywhere without her, eventually she didn't want to go in the car or on walks. Lately she had become so weak from lack of oxygen she'd fall down and not be able to get up, and couldn't see and hear. She had no quality of life. She couldn't follow me from room to room because she could no longer always manage to get outside to go potty, so was confined to the kitchen and my office.

For about a year we'd known the day was drawing nearer. One day Scott reported that Honey had made a blind dash for the gate he was opening, and he got the distinct message from her that she wanted to go off and find a way to die so I wouldn't have to deal with it. I didn't like that plan, I told her I'd be just fine, and we kept the gate closed as her body grew weaker. 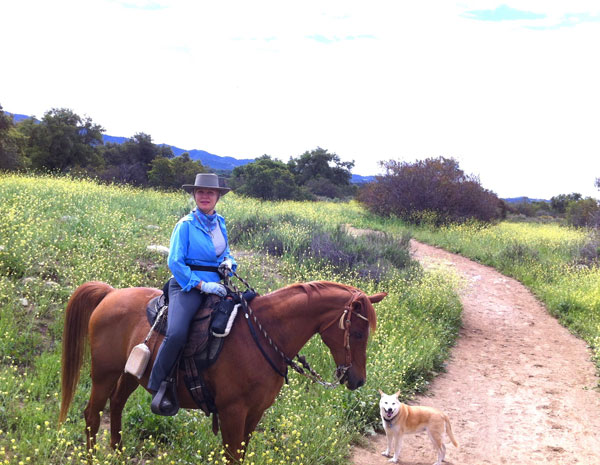 Being such a tough dog she hung on so long that we decided to assist her departure before she went into severe suffering. Heart murmur eventually leads to suffocation from lack of oxygen.

To try and assist her out I gave her the biggest Divine Opening I could, with the intenton of inviting her out of her body. As she sat there in her bed, I put my hands on her head, and she immediately slumped to lying down and began to let go. But the body has a tremendous survival instinct all its own, and in spite of me telling her, "You can always be with me and go everywhere I go again once you let go of this body," she would eventually jerk and rouse herself rather than completely let go.

And so we called a most wonderful husband and wife vet team who comes to your home, and we all sat with Honey as she slipped into a deep, relaxed sleep, then finally let go. Her heart beat for much longer than the vet expected--she always possessed an iron will. Twenty-five pounds of steely muscle into her late teens, she could scale seemingly sheer walls, climb fences, recover from injuries or falls, and even took a bullet in the hip once in Texas, never uttering a yelp--that would be undignified--and always bounced right back.

I'd thought perhaps I'd feel the same celebratory joy that I soared on all night with my dad when he departed a useless body, but Scott and I both felt a still, deep, quiet, pervasive peace. People have always commented on the remarkably peaceful vibration of my home, but it was even stronger now.

Oh I sometimes get tears of joy remembering her.

Many of you are familiar with that sound of Honey's tags jingling in the background of my session audios. That evening after burying Honey's body in the back yard, as we sat on the sofa quietly immersed in the peace and relief we all, including Honey, felt, I heard that jingling sound right behind me, quite distinctly. I looked at Scott and his head whipped around to face me as he exclaimed, "I heard it too--Honey's tags."

I smiled. "Hi Honey, thanks for giving us a jingle!" 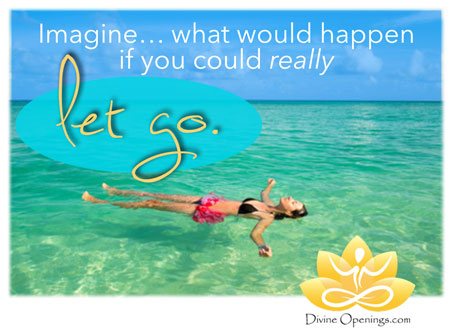 PS - Learn more about the retreats that help you really let go. It changes your life forever.

Bring your spiritual self to everyday life. Being a lawyer or store clerk is spiritual if you bring high vibration to it.
Lola Jones