I moved the chicken coop today. That's big fun for me. I'd get tired of lolling on the Riviera pretty quick, and start wishing for some good ol' ranch chores. And there's a touch of that decorating gene that women have -- we can't let something stay in the same place for long.

"Hmm, the feng shue would be better if it faced that way." Actually it was that the floor of the coop was piled up with... well, you know.... and it's just easier to move it and start fresh.

The chickens were not impressed. They clucked nervously as I moved it to the new spot. One got really desperate to lay an egg while I was still moving it. She clucked and fussed at me for awhile, then started scratching a hole to lay an egg .... outside the coop, in the dirt .....precisely where the laying box used to be!

We share that quality with chickens, horses, and other creatures of habit. Until we get used to an upgrade in our lives, we at least think about gravitating back to our old comfort zone, even though it was pretty stinky, and even though the new way is so much nicer.

Photos: Me and my old friend Bob, doing a role reversal on American Gothic a few years ago, with chicken. (He was not normally a cross-dresser.) Bob is off-planet now, having fun I'm sure.

And my chicken girls 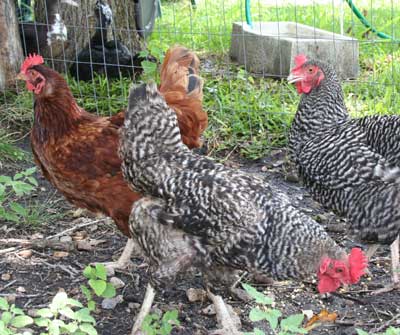 There's another piece to this story.

I moved the chicken coop by myself.

It's never been moved by fewer than two people before. And one of them needed to be a man with muscles. It's a building, 5 feet wide, 10 feet long, and 6 feet high, framed with treated lumber. It's heavy. Everybody here at the ranch was busy with other tasks, and I knew better than to interrupt. "You want to do what right now???" But when that rearranging urge hits, it won't wait. Neither hell nor high water will stop a woman -- somethin's gotta move.

I pushed on the chicken coop for a bit. It didn't budge. "I'm gonna strain something," I thought at first. New determination rose up. I could feel it. It strengthens you. I found a better leverage point. It moved a little. Then I found a way to pry and lever and scoot it. Pretty soon when I'd put my shoulder to it, I could move it, where I couldn't before.

Like the four minute mile, soon as I realized I could indeed move it, it got easier and easier to do. Before you know it, it's in a whole new spot. The chickens still aren't impressed. But they'll get used to it.

When I came back in and told my friend, who was still plucking away at his keyboard, he stopped, looked at me in amazement and said, "You did what???" He's helped me move it before.

Physical healing and life transformation is just like this. Soon as we get that it's really possible, it happens really fast. That's why I tell you to look for every tiny bit of evidence that it's working, and rave about it. Soon as you get the hang of it, you wonder why it was ever hard. 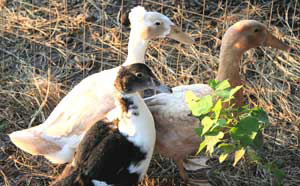 PS - Soon as I get back from my birthday trip to see Cirque du Soleil's "O" in Las Vegas, I'm getting some baby crested ducks --  the "laughing ducks" you can hear in the background of some of the videos in the Virtual Classroom. They have little cotton ball poufs on their heads.

Milk Dud thought these were so funny, she ate them immediately when we put them on the pond. I had this romantic vision of ducks on the pond. Milk Dud insists a snapping turtle did it, and Milk Dud's owner fell for it, even though I caught her with one duck in her mouth. That duck made it, though. He's the one in front.

I said to Milk Dud's owner, "So this duck just got caught on her tooth, and she was trying to shake it off?"

She can't help it. She had to hunt to live before we adopted her. 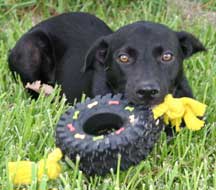 This is Milk Dud, denying everything.

I was sad. I miss their laughing. They had such great timing. They'd always laugh just as Michael said something like, "I'll clean up that mess in the garage tomorrow!"

PSS Post Vegas - Today I got 5 baby laughing ducks, just 3 days old. My new ducks will live in the big chicken yard, safe from Milk Dud and other carnivores. I had a brainstorm.... make a small duck pond in the chicken yard, and I can see it from the living room! Not everyone would want a chicken yard view outside their giant living room windows, but hey, whatever makes you smile.

For the pond, I guess I'll just have to get faster ducks.

My childhood dream was to be surrounded by all
kinds of animals.... I drew little pictures of farms, as if
from an aerial view.

PSSS - I looked out the kitchen window today and there were many wild ducks on the big pond. Note above that I said playfully that I'd have to get faster ducks? These wild ducks are perfectly capable of evading predators. Perfect.

But the biggest chuckle I got was that we often go to way too much trouble to have something that would have just come to us if we'd chilled out and let it happen.

Whether you can have it is not the question. The only question is how soon can you let go of the past, the beliefs that aren't allowing it, and the vibration of lack of it... and let it in? Soften and let it in.
Lola Jones