Lola at Stonehenge before the March 2013 5 day spiritual retreat in UK. Susan Williams, inspiring my everlasting gratitude for her great eye, took lovely photos before, during, and after the retreat and shared them with me.

Appreciation to Susan, a geophysicist with a real talent for photography, and now a friend. Susan first came to Divine Openings when I lived in Texas. She drove from Houston to Austin for three spiritual enlightenment sessions and later came to the 5 Day Silent Spiritual Enlightenment Retreat at City View Ranch.

Soon after that, her life took off on wild new adventures, and her family moved to the outskirts of London. In the past three years she's explored as many of England's historical and geological sites as she could, and so was my perfect tour guide when I went to England in March to lead the 5 Day Silent Spiritual Enlightenment Retreat. She signed up as an advanced retreater.

She picked me up at Heathrow Airport, and we were off on a six hour total drive to the Cornwall coast. On our way across the green countryside we stopped at that mysterious ancient spiritual site, Stonehenge. Then to a lovely country B&B (photo below) where I rested my jet-lagged head (from being too excited to sleep at all on the 12 hour flight). She handled all bookings and plans. I like to simply let go to the adventure and let myself be surprised.

To add fun to the long drive back to airport, Susan had secured for us the most luscious B&B in quaint but modern downtown Bath, where we luxuriated in the very hot spring that fed the ancient Roman baths. We swam in outdoor rooftop hot pools, indoor current pools, were drenched in waterfall showers, and breathed in vapors of eucalyptus, lotus, and other exotic scents in high tech steam rooms.

Then we ate some of the best gourmet healthy food ever at Tilly's Bistro.
Wow. I could go on and on.

Susan, thanks for an unforgettable time. More to come.

I spotted Susan sitting at this window and took her photo, then she took some of me there.

The rest of these she took. 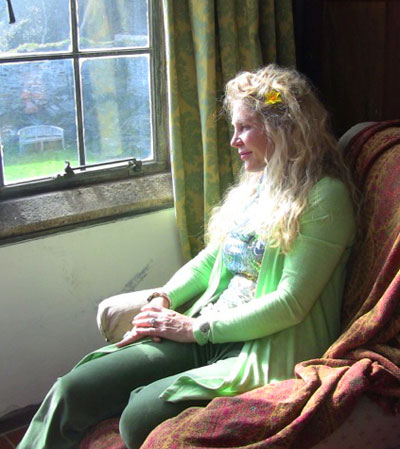 I went around sniffing noses with all the ponies. Moss covers everything in the moist sea air.

How to help all of humanity: elevate your own vibration and expand your pipes right now. For you are them and they are you, and time and space are all right here right now.
T. S. Eliot